All high-rise, low-rise and street developments in the Adelaide and North Adelaide areas.
Post Reply
3706 posts

The Adelaide City Council has unveiled designs for part of its Frome Street bikeway extension and requested changes to signage that one councillor labelled unnecessary because cyclists have eyes and “aren’t complete fools”.

The council last night resolved to delay any decision to implement the designs until the State Government makes a decision on co-funding an extension to the contentious bikeway.

But Deputy Lord Mayor Megan Hender described the sign idea as “surplus to requirements because we’ve got eyes”.
Advertisement

“I do want to just reassure councillors, for those of us who do actually ride bikes, [we] do recognise when we get to the end of a bike lane,” Hender told the meeting.

“I’m quite happy to have the signs there but I can assure you that they’re pretty much surplus to requirements, because we’ve got eyes.”

InDaily understands that the council’s transport experts believe signs are not required at the end of bike lanes, because the fact that they come to an end is visually clear.

But Area councillor Anne Moran told the meeting there were risks to cyclists’ safety at the intersection of Frome Street and Pirie Street, where the concrete separation between cars and cyclists finishes.

She said signs should be erected to warn cyclists they are entering general traffic.

There was confusion during the meeting about whether or not signs already exist to do just that.

A council staff member told the meeting there was already a sign to indicate end of the bikeway.

“If there are signs there, they’re very small signs and nobody’s seen them,” Moran told the meeting.

InDaily understands the representative was given the wrong advice at the meeting.

There are no signs to indicate the end of the separated bikeway.

When InDaily visited the bikeway this morning there was, however, a sign indicating the council’s $90,000 ‘minor safety improvement’ works had begun. Note the slices in the cement lane dividers on the right:

Area councillor Sandy Wilkinson told the meeting: “I just hope that no cyclists have a collision with the new signage”.

The council’s resolution on the matter says it will “look at ways to improve current signage on Frome Road [sic] to increase safety”.

The council’s administration presented two design options for the councillors to consider.

The first design option presented to the council:
Would cost an estimagted $50,000.
Bike lanes would be open only during peak bike traffic times (proposed time limits are 7-10am and 4-7pm on week days).
Four lanes of traffic would be maintained at all times.
On-street parking would not be allowed during peak traffic periods.
Off-peak on-street parking would be allowed.
There would be an impact on either the safety of people riding bikes or the kerb-side operations of two hotels on the street during peak times (pink dotted lines).
Peak period parking restrictions would need to be enforced on a regular basis to ensure that bike lanes are not blocked.

The second design option presented to the council:
Would cost an estimated $200,000.
Kerb-side separated bike lanes would be operational full-time (possibly with the
exception of sections outside the two hotels).
There would be four lanes of traffic during peak periods, with two lanes during off-peak periods.
On-street parking would be available during off-peak periods only.
There would be impacts on hotel operations or the safety of people riding bikes (in the pink dotted line area) depending on the final design solution.

The endorsed design will include significant dates for the LGBTIQ community, including the decriminalisation of homosexuality in 1975.

A council spokesperson said construction on the project would begin in September.

Both options look terrible (for the bike lane - the pride walk looks cool). If they're going to cave to the demands of hotels who insist their guests are able to alight from their cars in the middle of a bike lane then don't bother with it and spend the money somewhere else.
Top

So back to 4 lanes hey, not enough, lane fail. I want 6 lanes
Top

mshagg wrote:Both options look terrible (for the bike lane - the pride walk looks cool). If they're going to cave to the demands of hotels who insist their guests are able to alight from their cars in the middle of a bike lane then don't bother with it and spend the money somewhere else.

Agree, both options are rubbish. I really hope State Govt step in and just build a decent protected bikeway on both sides of the road all the way down to the zoo, it's not hard and it is not hugely expensive, I just wish council or govt would get on with it.

The South Australian Government is set to take on Adelaide City Council over its food truck restrictions after releasing a position paper to bring more vendors into the city.

The businesses claimed their trade suffered as a result of the trucks and said it was unfair that their owners could operate on their turf without the high costs of running a fixed establishment.

Assistant Minister to the Treasurer Chris Picton today launched a position paper that outlined plans to remove council restrictions on permits and to support the establishment of a food truck park in or near the CBD.

If successful, it would remove all restrictions on the number of permits that can be issued, on operating hours (outside special events), on what food can be sold, and it will set maximum permit fees.

Councils would be allowed to establish location guidelines.

"This approach is considered to strike the right balance between establishing a consistent trading environment for food trucks, while allowing councils to adjust for local conditions," the position paper said.

"However, the Government reserves the right to further amend the regulations to ensure fair trading conditions for food trucks if councils impose unduly restrictive arrangements."

The Government wanted a permanent food truck park on public or private land in or near the Adelaide CBD that would operate into the evening.

It also wanted to encourage food trucks to operate at transport hubs, such as public transport interchanges.

Adelaide City Council's restrictions last year were labelled "disappointing" by Premier Jay Weatherill, who said it "backed one business over another in the city".

Deputy Lord Mayor Houssam Abiad responded by saying that the changes would not affect how many trucks were set up on any given day, except during major events.

"In looking at the data over the last couple of years of how many trucks operate on any given day in the city of Adelaide, it has never exceeded the number of eight ... outside special events," he said.

The position paper and instructions for contributing are here:

[Shuz] wrote:Zoning is exactly what keeps adult stores from opening up shop next to a primary school.

What a stupid idea. Moving on...

Not sure there's any primary schools in the cbd but I get your point, a shop opening up across from your unit might not be good for value, but I think that's essentially what happens now with the slow re zoning creep it's just more sinister and dishonest.
Top

[Shuz] wrote:Zoning is exactly what keeps adult stores from opening up shop next to a primary school.

What a stupid idea. Moving on...

Not sure there's any primary schools in the cbd but I get your point, a shop opening up across from your unit might not be good for value, but I think that's essentially what happens now with the slow re zoning creep it's just more sinister and dishonest.

There is Gilles St Primary School in the south-east.
The JetExpress must be saved!
Top

The Adelaide City Council is looking for a low-cost method of rolling out an interconnected network of separated bikeways throughout the CBD, beyond the controversial Frome Street bikeway.

The council last night asked its administration to produce a report on how it could lay bike lanes throughout the CBD that would protect cyclists from traffic, but without the large cement barriers that have polarised public opinion about the Frome Street bikeway.

South Ward councillor Priscilla Corbell told last night’s meeting that while good work had been done in recent years to make the city accessible for cyclists through the parklands into the city, the CBD itself featured minimal bike lanes and was still difficult for cyclists to navigate safely.

She used a map of the current bike network through the CBD (below) to argue that cyclists needed an interconnected bike lane network.

Plans for a network of bike lanes through the CBD features in the council’s Smart Move strategy. 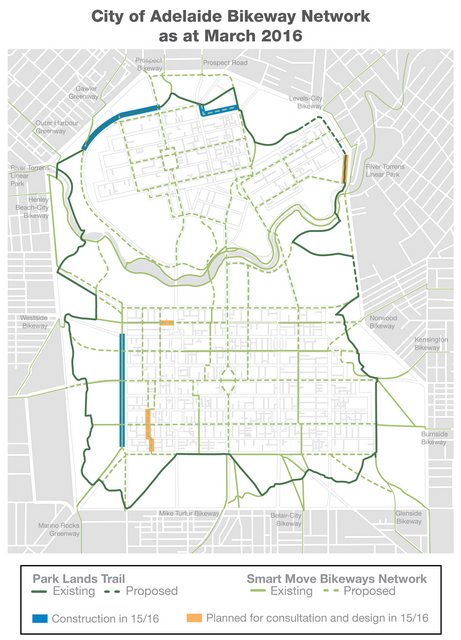 Central Ward councillor Houssam Abiad said “we don’t have anything that resembles a bike network” in the city, arguing a network of separated bike lanes should be rolled out quickly and cheaply.

“We’re talking about a very small city, so I think we can achieve this very quickly,” he told the meeting.

Deputy Lord Mayor Megan Hender said she favoured “slight grade changes, perhaps rumble strips, that sort of thing – so we can come up with the sort of bikeway that can be rolled out broadly across the city, and in my view, broadly across the metropolitan area”.

The report on “the most economical separated bikeway options” will include:

The report will be presented to the council next month.

good on them for at least trying.
Top

Looking at the map it's an ambitious plan but if even half of it can be implemented in the next 5 years then it will be a vast improvement on what we have now.

As a cyclist I obviously feel safer with a solid barrier between myself and the traffic, but to be honest anything over and above the painted green lanes we have now would be a bonus. I actually quite like the idea of flexible posts, the height of them creates a distinct visual barrier between the cycling lane and the driving lanes and presumably they're cheaper and simpler to implement than a Frome Street style solution (although I think there should be at least one east-west and one north-south completely separated bikeway traversing the city a la Frome Street).
Top

That's great news, a bike network will be a worthy addition to our city, and agree with the low cost option actually, better to get the network up and running.
Top

I wonder how long until that General Motors shill Alex Antic throws a tantrum about this.
Top

https://www.youtube.com/watch?v=vZ3Cr8j ... e=youtu.be
Smart Lighting by the ACC...
Opportunity is missed by most people because it is dressed in overalls and looks like work.
Top

So my constant badgering, sorry, engagement with ACC appears to have earned me an invitation to their "Community Budget Forum" next Thursday. Anyone else get this email?
Top
Post Reply
3706 posts