All high-rise, low-rise and street developments in the Adelaide and North Adelaide areas.
Post Reply
48 posts

The Adelaide city council has proposed 2 locations for "city gates" - some sort of architectural statement signifying you are entering the city centre. The article of course mentions famous city gates like the Arc de Triomphe and the Brandenburg Gate, these were built in a "golden age" of architecture. I am not sure a modern interpretation would be a success....but I am willing to give it a go once we see some definite plans/drawings/renders etc

From the Gold Coast Bulletin !!!


Adelaide City Council has earmarked two locations for potential gateways into the CBD, with a budget of $3.1 million

PARIS has the Arc de Triomphe, Berlin has The Brandenburg Gate, New Delhi has the India Gate and Brussels the Arch of Cinquantenaire.

Now Adelaide could be getting a couple of gateways of its own — if the City Council gets its way.

The Adelaide City Council has earmarked two locations for potential gateways into the Adelaide CBD and has a budget of $3.1 million dollars to “enhance entry experience and city presentation”.

Main North Rd at Prospect and Sir Donald Bradman Dr will house what the council describes as “entry statements”.

However, North Ward Councillor Phil Martin said no plans or designs had been submitted to the council for approval, only the expensive price tag in its budget forecast.

Don't some of our tall buildings act like a gateway into the city? eg Former Optus building and Vue as you enter the city via King William Street? I remember Rev also saying something very similar about the Central Adelaide Apartments as you enter via Grote Street.
Top

timtam20292 wrote: Don't some of our tall buildings act like a gateway into the city? eg Former Optus building and Vue as you enter the city via King William Street? I remember Rev also saying something very similar about the Central Adelaide Apartments as you enter via Grote Street.

Well, they sort of do act as markers to the city centre/business centre.....but most other cities have exactly this same thing.
This new idea obviously is aiming for something iconic (and if it is not, then don't bother)
Adelaide needs something that will stand out above the pack, something that will become a "signature" landmark.....if there aren't loads of tourists taking photos of this "new object" then the plan will have failed.
Top

Different for each city though. Well it would have to be done right like you said. I love the one over the EastLink Freeway in Melbourne

With a budget of 3.1m, this sounds tacky as f***. Would rather the money be invested into more laneway renewal or further upgrades to the city's squares.
Top

I reckon you could get some garden gates from Bunnings for about $300 bucks and save ourselves $3.1m.

Nothing says "Welcome to Adelaide" like a quintessential Bunnings garden gate and sausage sizzle stand.
Any views and opinions expressed are of my own, and do not reflect the views or opinions of any organisation of which I have an affiliation with.
Top

Honey of a City wrote:How about finishing Victoria Square first?

I think this is a great idea, these are the sort of of innovations that sets Adelaide apart from other Australian cities in my opinion, rather than having big dick competitions with the other major four cities. Adelaide is different and unique and that's where we should be heading. Don't get me wrong though I fully endorse building a spectacular skyline as well.
Top

Its not innovative if someone has already done it before. Several times the world over. This ridiculous and absurd proposal basically stinks of "big dick competition".
Any views and opinions expressed are of my own, and do not reflect the views or opinions of any organisation of which I have an affiliation with.
Top

The dinosaur gates of Erenhot are supposedly well worth visiting if you ever happen to find you have a few hours to kill at the China/Mongolia border while waiting for your train to have its wheels changed.
http://www.amusingplanet.com/2013/06/th ... china.html 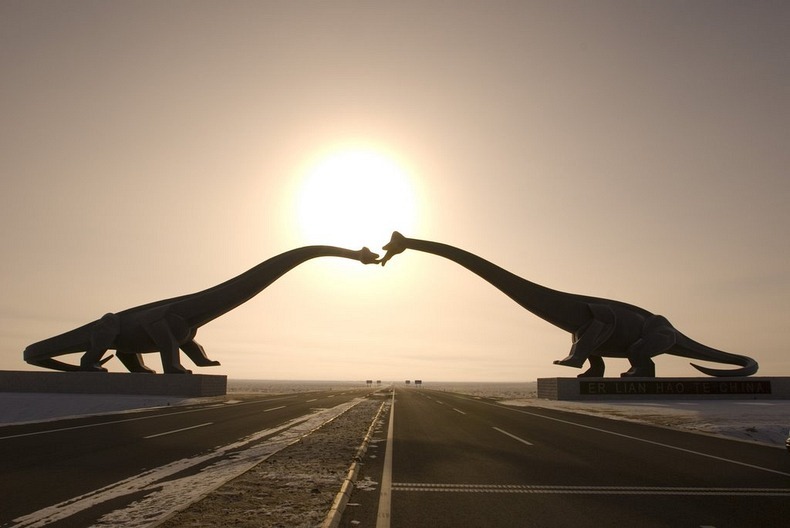 I don't hate the idea but it's a fascinating insight into how the ACC functions, or doesn't function.

A pie in the sky idea of city gates apparently has money allocated to it in the budget... but the Vic Square project was started when they hadn't secured enough funding to complete it?

Also, why would you choose prospect and not somewhere on route from the SE freeway?
Top

Having something iconic as you come into the city is fine, but it's better if that happens as a consequence of something else.

Build an interesting statue, or memorial, or fountain and have it be at the perimeter of the city.

Or hell, like was mentioned, put the money towards Victoria Square.

They used the Arc de Triomphe as an example. Obviously we won't have anything on that scale but if Victoria Square was completed (especially if there were some elements going over the East/West street) then it would be a great thing to encounter as you enter Adelaide from the airport.

Or put this money towards the riverbank and get some great fountains and lighting going on the Torrens, so anyone entering the CBD from the North has an even greater view.