All high-rise, low-rise and street developments in the Adelaide and North Adelaide areas.
Post Reply
2498 posts

monotonehell wrote:Confusion is understandable. There seems to be a lot of contradicting evidence, and a near stonewall from the authorities who do the approving. This is why we made the investigation and submission back in 2008.

That diagram looks more like the OLS map for Adelaide Airport. Although there's some extra frilly bits I've not seen before. It could be a creation from other data by the developer because they "needed something in the document".

The only time we've seen a diagram of the PANS-OPS surface is where it's, again, been required by some bureaucracy and the designers of the document have created one. Even though the regulations require such a map to be made available to the public.

After extensive requests by Wayno back in 2008 we came to the conclusion that no such map was available, other than the rough one in Adelaide Airport's development plan. (Which is reproduced in the S-A submission.)

The weird thing is that the regulations also state that penetrating the PANS-OPS ceiling is prohibited, and yet we have several applications which do so and have been approved.

Really? I'm about 99% sure now that the diagram I posted above is an accurate map of the PANS-OPS surfaces for the Adelaide CBD.

It can't be the OLS map, as that diagram is fairly easily available online and is less complex in shape. This is (part of) it:

As you are aware, PANS-OPS is typically higher than OLS, and that's the case with the values between these two diagrams. For reference, the 123 Flinders Street site lies between the 130 and 140m AHD OLS contours, and between the 240 and 250m AHD contour lines for the PANS-OPS map. A snippet of the same PANS-OPS map is also visible in the Aeronautical Impact Assessment document Ben posted, which cites PANS-OPS values on the 1-8 North Terrace site, which are again consistent with that map.

What developments are you talking about have been approved that penetrate PANS-OPS? The only thing I can think of is 1-8 North Terrace, but that only temporarily penetrates PANS-OPS due to the height of the construction cranes, which as far as I'm aware is permissible so long as approval by the relevant powers-that-be is given.
Top

Noticed this evening that the Christian Science church on the SW corner of North Tce and Frome St is for sale, touting development potential (with no height limits).
Top

Anyone know what's going on on Currie Street? This is between the HYPA and Influencers, and used to have a car park on it.

Nathan wrote:Noticed this evening that the Christian Science church on the SW corner of North Tce and Frome St is for sale, touting development potential (with no height limits).

I came on here to share the same information! For such a landmark corner, I'm hoping for something outstanding. Now lets just hope the horrible car hire place across the road follows suit.
Top

Nathan wrote:Noticed this evening that the Christian Science church on the SW corner of North Tce and Frome St is for sale, touting development potential (with no height limits).

It was advertised in todays paper.

Potentially to be merged with Frome Central development?
Top

Norman wrote:Anyone know what's going on on Currie Street? This is between the HYPA and Influencers, and used to have a car park on it.

The car park is part of Influencers' property (used to park there many a time when visiting the site's previous tenant Word Bookstore), maybe an extension of their building?
Top

Surprised they're doing work on the City site when their new south campus is still without a permanent home.
Top

Does anyone know what is going on in the grassed area north of the rail lines?

Hopefully this is a big facelift for this building.

387-391 King William Street is fenced off and there is a great big hole in the front of the building. Any idea what they're doing there?
Top

From the D.A. - Change of use from office to cafe on ground floor with new single storey extension to rear and associated internal and external alterations, removal of walls on first level to create open space office with balcony.
Top

Here is a photo of that site I mentioned.(this is the first of the photos that I'm replacing due to photobucket's stupidity, Imgur all the way) 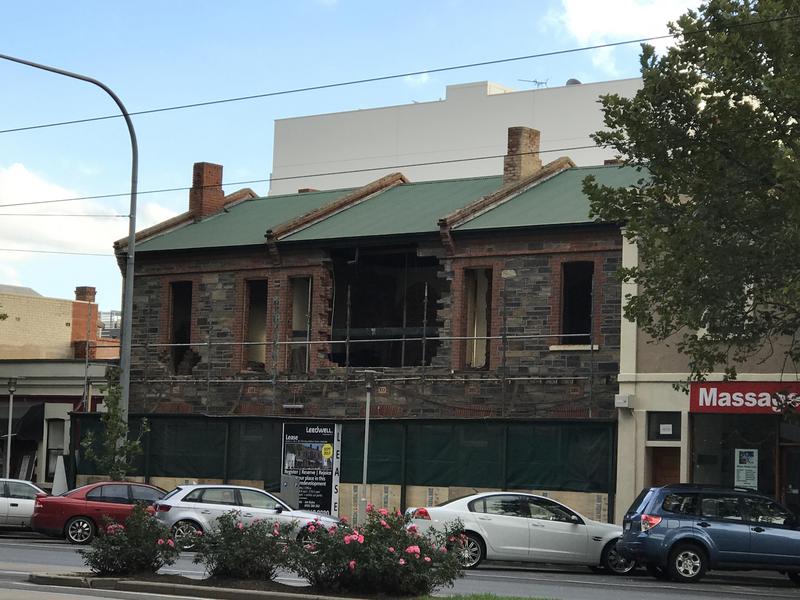 
Ben wrote:Great to see this run down building shown some love. Note this building recently had Heritage listing rejected so developers could have demolished it. Mayfair Hotel management are in talks with the ACC about the installation of a road-side indentation on KWS for pick up and drop off which would also include planter boxes etc all at the cost of the hotel. The original proposal also had the request to create a paved mural of their logo from the gutter to the front door but this was rejected because it would ruin the street-scape unity of the city's main boulevard.
Top
Post Reply
2498 posts