I made another run to the city this afternoon. No new track has been laid yet in Victoria Square but because of the rain, this is probably to allow for the underbase to soldify. To summarised what has happened since the last update:

-Erection of the overhead masts has been just about completed with just one more to be currently put up in Victoria Square. King William Street is still awaiting the masts to be erected but they are delivered ready to go.
-The last intersection (King William Street - Angas/Gouger Streets) has now got overhead span wires installed. Since these are over the current 'live' overhead for the existing alingnment, the overhead wires do look very complex. This is an interim arrangement until the final link up.
-Brackets have also been installed on nearly all the overhead masts on North Terrace. When I there, only two more on North Terrace needed to be done and they are probably done by now.

Plenty of the photos in this update.

Single bracket arm near Morphett Street Bridge. Sorry for the slightly out of focus shot. 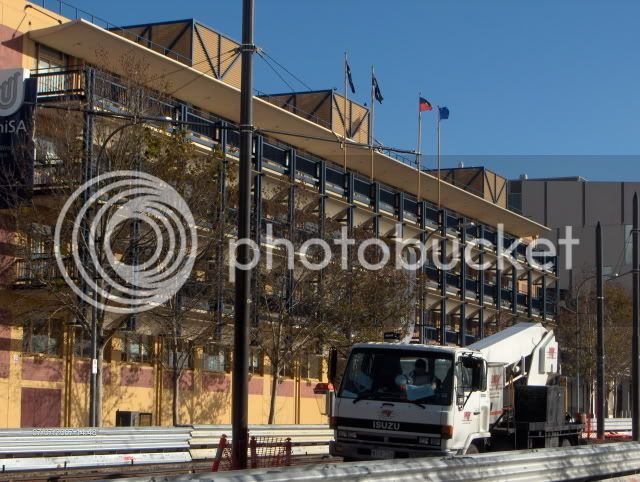 City West. Other then the overhead, nothing has really happened here since early May.

Double brackets before the wires to the pole are installed.

Wires at the top of the mast.

Work equipment outside of Parliment House. From what I could tell, some median strip work was also being undertaken. 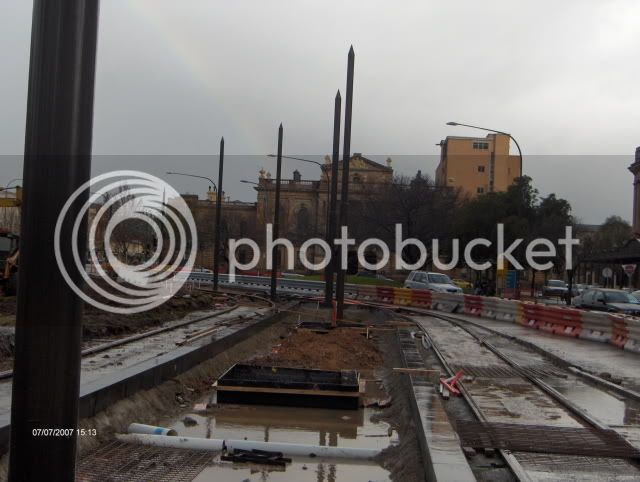 Poles along the southern end of Victoria Square.

The very southern end of the alignment looking north.

Overhead wiring at the end of Victoria Square at present.

I would hope amongst all this, that there are plans to redo the wiring and platforms down the southern end of KWS.
Top

momentkiller wrote:I would hope amongst all this, that there are plans to redo the wiring and platforms down the southern end of KWS.

No there will be no upgrading of the Southern End of King William St. Upgrading the City South tram stop was looked at, but ruled out as lack of use.
South Tce. will receive a new siding for the "bline tram"
Garno!

Tom wrote: No there will be no upgrading of the Southern End of King William St. Upgrading the City South tram stop was looked at, but ruled out as lack of use.
South Tce. will receive a new siding for the "bline tram"

Well, hopefully that will change. Part of the idea of this tramline is to get people back to the southern end of the city, so one would imagine that the "lack of use" excuse won't be valid for much longer. Having said that, if you want to increase activity in an area, you have to make it an attractive place to go to. The catenery over the southern end of KWS, and the lack of trees because of it, make the southern end of KWS look like the northern end's poor cousin who no-one wants to visit.
cheers,
Rhino
Top

just noticed in todays paper, from Transport SA. They are starting the South Tce siding from Mon 16th jul, and you wont be able to park near the stop from Mon and have said that the Gouger St intersection will be done in early Aug. Would be good if they can do the final concreting along King Will St soon, those metal barriers are awful
Top

I have had a flip on the TransportSA website and found this.

Temporary changes to traffic conditions on Peacock Road, Adelaide will be implemented from Monday, 16 July 2007 to allow works associated with the tramline extension project to be undertaken adjacent to the existing tramline corridor.

The parking lane on the western side of Peacock Road will be unavailable (for approximately 175 metres south of South Terrace) until Monday, 6 August 2007.
To provide a safe alternative footpath during these works, pedestrians will be redirected to the car parking lane which will be delineated from traffic by barriers.
Tramline services, the bicycle lane and the two northbound traffic lanes along Peacock Road will not be affected by these works, which are expected to be complete by Monday, 6 August 2007.

The Department for Transport, Energy and Infrastructure thanks city commuters, residents and businesses in the area for their patience during extension of the tramline.

TransportSA wrote: Further major construction works
Construction works for the tramline extension are progressing well, with works within the tramline corridor in Victoria Square, King William Street and North Terrace to continue over the coming weeks with minimal impact on pedestrians and motorists.

Following the track works adjacent to Peacock Road, the final stage of major works will involve major track laying across Angas / Gouger Streets and track modifications in the vicinity of South Terrace and Peacock Road over a weekend in early August 2007.

Further details of the next stage of major construction works will be provided shortly on this website.

Another day, another round of updates. More work on the verhead has continued along North Terrace. All the cross brackets are now inplace. The brackets at the eastern end of North Terrace (ie closest to King William Street) have already been tentioned with rope. That really does give you an idea of how it will all look not that long from now.

No progress has yet to be made at City West stop.

New conduits have been put in at the Pirie Street stop. Same at Rundle Mall.

I was told by one of the contractors that the southern half of Victoria Square will be operational and in regular use before the rest of the route is in early August when they make the 'cut and shut' to the new line. That is why progress is moving at a faster rate at the southern end. The rest of the line may very well be ready to use about 5 weeks afterwards.

Bracket arms tensioned on North Terrace. No wires but ropes at the moment.

Conduits being laid at Pirie Street stop. Work was just starting at Rundle Mall stop at that time also.

The old to the right, the new to the left.

Newly laid crossover that had been concreted only that morning.

Curve at the southern end of Victoria Square stop.

Earth works underway at the northern end of the square.

Thanks 409. I noticed yesterday Traffic Control Systems were installing new signals on the Hindley Street intersection. Hindley Street now has left/right turning arrows, and diagonal crossing lines for the scramble.

Also spotted these on the North Tce/King William intersection:

Any truth to the rumour that the reason none of those big brown poles not appearing along KW street as yet is becuase the workers have uncovered an old pipeline beneath the surface and the engineers don't know what to do about it?
Top

On the very last day of April, that is exactly what they were doing. There was a water pipe that was underneath the median strip that had been made redundant by the extension. I have some photos of the work crew digging it up, just have a look back a few pages.

yaaay! thanks for the pics guys can't wait till this is completed!!! will have to jet over to SA to see the final product soon!!!
Top

Woah, nice work Will! I'm coming back into Adelaide tomorrow, looking forward to seeing the progress

Here's Flexity 104 passing the new South Tce siding works and a shot of some nice new overhead which has been installed before the track.

In Berlin (where I was recently) they use an older model of the Flexity I think... check it out.

I have some bad news for everyone here. I made a run to the city and also South Terrace to get photos of the extension as usual. Unfortunatly, the first 10 photos I got were of less then idea quality and the rest were 'blacked out' by the camera completely. After a total of nearly 8000 photos from the camera, it has packed up completely. Because of my almost non existant budget (caused by a trip to Melbourne later this year), I cannot get a new camera.

This means that my weekly update series will have to come to an end.