All high-rise, low-rise and street developments in the Adelaide and North Adelaide areas.
Post Reply
245 posts

Thanks for the photos Will,

The interior was what drew us to the building. I suppose using two different architectural firms for the interior and structure (BVN and Hassell respectively) was probably not the best idea, as they had different intentions for the project. That being said the structure isn't that bad, minimal floor to floor height, interesting expression of the plant room, and a really expensive facade. I suppose they had to make compromises in the budget to achieve that green star rating.

I noticed that some of Pikey's and Pant's images in this topic are no longer hosted and I'm a little curious if they contain any construction details that I could have missed in the model. I'm still unsure where the toilets are located on every floor except the ground floor, and I'm not quite sure about the northern side's layout.

I'm also a bit iffy about the service risers as there doesn't seem to be any significant penetration of the floorplate where the risers are located on the western facade. That little indent in the beam you can see on the right side of this image is an ME riser, so I'm thinking that the plant room only chills the water which services the active chilled beams and runs pipes down the ME riser and then plummed to each active chilled beam. I think air must be drawn in at each level, and then vented to the active chilled beams. The plant room is rather large just to chill water though.

There must be a large service riser on the northern side of the building as the workshops and labs would probably have fume cupboards, and the fumes would need to be vented at a high height. I haven't located this yet though.

There's also the locations of electrical services that would be beneficial. Those interior shots that you provided help with this as i can see that they run through the ceiling cavity and then run through those poles down to the desks and work areas, though where they are run vertically through the building is a little unclear still.

Any further help will be greatly appreciated, and thanks again for your help Will.

Damn and blast. That interior design is really quite good, whereas the exterior is less so.
Top

Uhohh..someone on S-A wont be happy, another of those "greedy Greeks"..

A MELBOURNE petrol tycoon has made his first foray into the Adelaide commercial property market with the $100 million plus purchase of one of the CBD’s most well known buildings.

Santos House at 60 Flinders St, has been snapped up by Nick Andrianakos, of the Nikos Property Group, for $101.35 million to add to a burgeoning Victorian property portfolio.

The 15731 sqm, five star NABERS rated building has been purchased from the Lendlease managed, Australian Prime Property Fund Commercial, and was built for ASX listed oil and gas producer Santos in 2007, which has recently committed to a new lease with further options.

New rooftop signage as part of the refurb. Hopefully it lights up blue like it used to when it was first built. 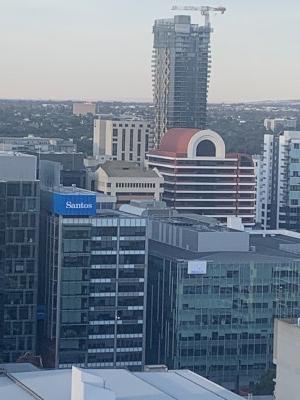 This does indeed light up. Its extremely bright. More so than the original one. I couldn't get a photo on my phone to give it justice. Shame its not taller as it would look good up in the skyline.
Top
Post Reply
245 posts