All high-rise, low-rise and street developments in areas other than the CBD and North Adelaide. Includes Port Adelaide and Glenelg.
Post Reply
1093 posts
Message
Author

Can some kind person cut and paste The Advertiser article here with the renders.... 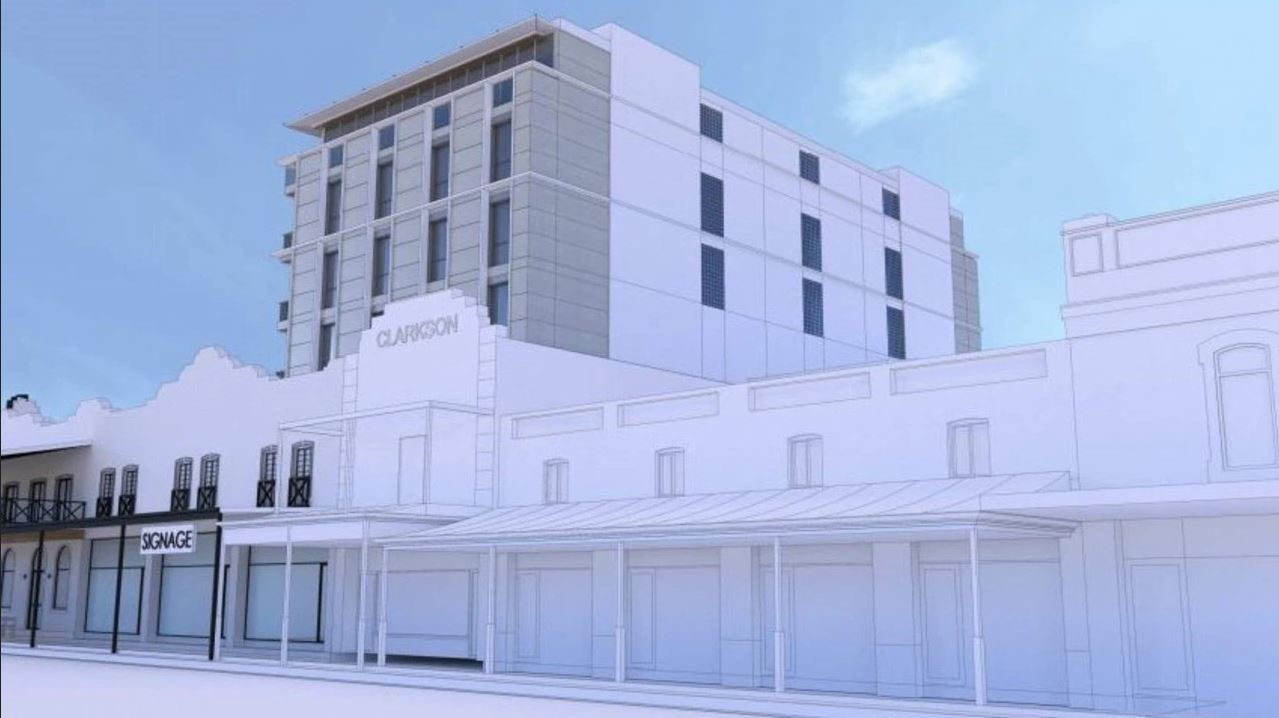 A decision on one of Port Adelaide’s major developments is set to be made by the State Commission Assessment Panel this week. 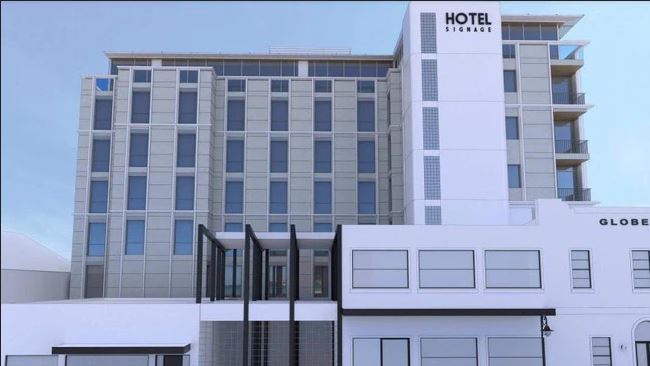 The original redevelopment plans included the addition of bars, a beer garden, a restaurant and meeting rooms to the historic pub.

But after the delayed works, the Ginos Group went back to the drawing board. New plans now include a seven-storey hotel comprising 64 accommodation suites.

The agenda for Wednesday’s SCAP meeting recommends granting approval to the project on the grounds it is not seriously at variance with the policies in the development plan.

“Overall, it is considered the application displays sufficient merit exhibited by an acceptable level of design quality and one that achieves the conservation of the setting of the local heritage place,” the report states.
Top

After some 30 years of cruising the Port River Chris and Alison Mitchell have decided to take a well earned rest and the Dolphin Explorer will cease cruising.
The Dolphin Explorer Cruise Boat has been sold and will be relocating away from Port Adelaide.
We are in the process of notifying and cancelling the cruises past this date, we apologise for any inconvenience. We thank everyone for the ongoing support over the past 30 years.
For those who wish to purchase tickets for the last 3 cruises please purchase via our website.
Regards
Chris and Alison Mitchell
https://www.facebook.com/dolphinexplore ... 5931439513

Anyone know what’s happening with the development next to the Colac Hotel? Basement and start of the lift shaft completed over a month ago but haven’t seen anyone on site in 5 weeks.
Top

Smithy84 wrote: ↑
Mon Nov 08, 2021 9:36 pm
Anyone know what’s happening with the development next to the Colac Hotel? Basement and start of the lift shaft completed over a month ago but haven’t seen anyone on site in 5 weeks.

The Colac apartments are still being advertised on Realestate.com.au...........whatever that means.
Top

Demolition of Fisherman's Wharf market shed approved, which the developer says will happen within 12 months.

It worries me that once that shed goes, not only is there very few remaining that are on "public" land that can be repurposed, what is stopping this development from ending up like the proposed hotel next door? That site has been empty for close to 15 or more years. Also, the fact that the developer has not released any plans yet demolition has already been approved is also worrying. What is actually been done to attract people to the lighthouse and surrounding area on weekends and during the week? If its another hotel or block of apartments, that is hardly a reason to attract families and the general public. I really hope the new development will incorporate attractions but I don't have a good feeling about this.
Baytram 366's Flickr: http://www.flickr.com/photos/[email protected]/collections
Top

The Fishermen's Wharf Market will be closing in 6 months.
I Follow The Port Adelaide Football Club
https://www.facebook.com/IFollowThePAFC/
Top

Inside the plan to get the Port back on track.
Port Adelaide is eagerly awaiting Labor’s promise to extend a train line right into the heart of the Port – saying it will dramatically boost the area.

I Follow PAFC wrote: ↑
Sun Apr 17, 2022 7:17 pm
Inside the plan to get the Port back on track.
Port Adelaide is eagerly awaiting Labor’s promise to extend a train line right into the heart of the Port – saying it will dramatically boost the area.

Can someone please post the actual article - I'm guessing the majority of us here aren't subscribers.
Top

I Follow PAFC wrote: ↑
Sun Apr 17, 2022 7:17 pm
Inside the plan to get the Port back on track.
Port Adelaide is eagerly awaiting Labor’s promise to extend a train line right into the heart of the Port – saying it will dramatically boost the area.

Can someone please post the actual article - I'm guessing the majority of us here aren't subscribers.

Train line extension will boost development, industry and tourism to Port Adelaide, community says
Port Adelaide is eagerly awaiting Labor’s promise to extend a train line right into the heart of the Port – saying it will dramatically boost the area.

Extending the train line into the heart of Port Adelaide will spur on development, creating a more attractive proposition for housing, industry and tourism, locals say.

The move is a $52m pledge by the new state government to supercharge the historic maritime town, which has begun to transform into a thriving waterfront community over the past few decades, but has a public transport system that has developed little during that time.

Shortly after the Marshall Liberal government came to power in 2018, plans for a 1km spur off the Outer Harbor line and station near Pirate Life Brewing on Baker St were put on ice.

But the change of government has broken that ice and the wheels are in motion for a revival of the Port Dock railway station, although the timeline remains a mystery.

The project will also include a rebuild of the Port Dock railway station.

Long-time Port developer Hans Ehmann welcomed the moves as “another positive step forward in the resurgence of Port Adelaide”.

He said an efficient public transport system would “benefit restaurants, pubs, breweries, hotels and other attractions by making it easier for people to get to the Port”.

“The railway line extension will also add to the liveability of Port Adelaide, which supports my goal to reintroduce a sizeable resident population to the city,” Mr Ehmann said.

“We are in discussion with architects, planners and financiers regarding development plans … (including) Customs House … which will add further value to the lifestyle of residents of the Queen’s Wharf.”

“At present many visitors use the train, but it stops quite a distance away,” he said. “The extension will make it more convenient for visitors to access the Clipper Ship and the other three museums.”

Port Adelaide Enfield Mayor Claire Boan has publicly supported the rail extension, but also wants to see a vibrant train and bus interchange that doubles as a cultural precinct.

Local MP and Deputy Premier Susan Close said the rail extension was “absolutely going to happen, this term … for the economic benefit”.

“There’s a housing development called Dock One, which is just over the road (and) the people were very disappointed when their easy trip into town was cancelled,” Dr Close said.

“And that development is only just in its first stage, the other stages are happening at present, so that will make it much easier to develop and sell properties there.”

Dr Close said there had been high levels of investment in the area by local businesses including Pirate Life and the Port Admiral Hotel, on the basis there would be an extended train line to support them.

“And of course there are public servants who work in the port … and they will now be able to much more easily hop on a train and go into the city if that’s necessary for work,” Dr Close said.

Pirate Life worker Christie Hickey said having a train stop close by would be great, “particularly for the punters outside of the area to be able to easily access everything the Port has to offer, especially Pirate Life”.

The Port Adelaide Renewal Project was established in 2012 to boost the area and has turned $50m of public money into more than $600m of private sector investment.

More Coverage
Demolition approved: Popular Port market set to shut
19th Century-style seaport village planned for Port Adelaide
By 2027, the project is expected to have created more than 350 construction jobs a year and a total of 1500 to 2000 ongoing jobs in the region, Planning, Housing and Urban Development Minister Nick Champion said.

Up to 8000 additional residents will have moved in, “as a result of new housing and employment options”, he said.
Top

There are many families with children and old people whom visit the National Railway Museum. Its a long walk up and down the ramps at Port Adelaide Station (Commercial Road). From there it'll be at least a 10 minute walk, even if they transfer to a bus to take them to next bus stop or Port Adelaide Bus Interchange, its still a walk from the bus stop to the museum or wharf area for that matter. On Lipson Street its not uncommon to see vehicles barrelling down making it awkward to cross, council should install pedestrian crossing. The proposed Port Dock Station would benefit them. Its not a magic bullet. The council and state government should provide a free regular loop service or state government could alter routes to run via Commercial Road, then Godfrey Street, Lipson Street, St Vincent Street terminating adjacent the town clock tower.
Top

If the bus Interchange is added in which would use the NRM carpark the roadways will need to support the weight of the buses especially articulated buses.
Top

A carpark is literally asphalt. Like roads. They don't need to make roads heavier just for buses...
Any views and opinions expressed are of my own, and do not reflect the views or opinions of any organisation of which I have an affiliation with.
Top

There's quite a bit of road under the asphalt that helps to keep it flat with point weights on it, and without creating grooves or ruts where things drive all the time.